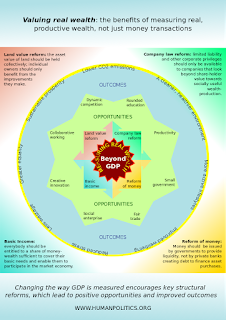 The idea of a basic income - a fixed cash payment to all individuals, in lieu of state benefits and tax allowances, but sufficient to cater for their basic needs - is increasingly emerging from the shadowy world of obscure think tanks and idealists into the starker light of mainstream politics.

This light is much more exposing, as the UK Green Party discovered to its cost in the run up to the general election earlier this year. Although a citizens' income has been part of their policy platform for some time, it was set at such a low level that many current recipients of state benefits would have been worse off under their proposals.

The basic income model is only viable if the sum allocated is large enough for people to live on. "Large enough" is a relative concept, so the level of the basic income needs to be relative, too. One way to achieve that is to make it a fixed percentage of per capita national wealth. This means that the market can do its damnedest without the risk of anyone getting too badly hurt.

It is true that the “balance of power” between employers and employees would be altered, but in a beneficial way. The money value of worthwhile, enjoyable, rewarding and productive work would tend to fall, because people would recognise its human value and would compete to undertake it at a lower rate. Conversely, the money demanded for undesirable work would rise. There would be a powerful incentive to reduce such work by investing in robotics and other productive technology, both to increase efficiency and improve worker wellbeing and satisfaction.

To consolidate these benefits in terms of government policy, however, requires a rethinking of the way in which wealth production is defined and measured. At present, wealth is almost universally measured in money, so the human quality of work has no value unless it happens also to produce an increase in cash terms.

The most effective way to grow money wealth is to increase asset values. Inequality is the natural consequence, since between the owners of assets and the people who pay “rent” to make use of them the flow of wealth is one way, from the asset-poor to the asset wealthy. The economic activity that supports this flow is largely transactional, flowing money through the system and allowing asset-owning investors to take a cut as it passes through their hands.

Money supports a system in which wealth is infinitely storable and transferable but in limited supply. Economic activity in this system has more to do with a competition to accumulate stored wealth than the creation of new, real wealth that people can use. The payment of a basic income is not consistent with this picture. As fast as people could accumulate money-wealth, much of it would be recycled back to the people from whom they had acquired it. Asset values - and the money value of the economy - would increase more slowly.

The human value that is contained in worthwhile, enjoyable, rewarding and productive work has no such limiting factors, but builds upon itself. Happy, fulfilled people tend to support one another in their happiness. Wellbeing increases through a virtuous, self-reinforcing cycle; unlike money, it is not a zero-sum game. Nor is the potential for growth in wellbeing constrained by environmental or resource considerations. Only time is a limiting factor - the time available for people to provide for themselves and others the forms of wealth that they truly value.

From this perspective, the basic income is a facilitator of wellbeing, providing the liquidity that allows people to participate in real wealth-creation on their own terms. Real wealth differs in three ways from that which gross domestic product (GDP) measures.
The basic income, if properly applied, will encourage the production of real wealth in all three ways. In human and environmental terms its effects will be entirely positive. But advocates for a basic income will struggle to be make progress while government policy is focused on GDP growth as currently measured. This is because receipt of a basic income will disincline people to undertake repetitive, demanding, unrewarding work upon which GDP growth has come to depend.

From this perspective, the basic income looks like a policy designed for an economic framework or paradigm that is not yet established. The current paradigm favours money accumulation; the paradigm that is needed to replace it will favour the creation of the real wealth that allows people to flourish.

The first step to making that change is to change the way in which the growth of economic activity is measured. This means either abandoning GDP altogether as an economic metric, or revising radically the way it is calculated to include only the components of work that contribute to the totality of human wellbeing.

Plenty of academic and technical work has been carried out on this “Beyond GDP” agenda, with contributions from the United Nations, the European Union and the OECD. Several new indices have been constructed, among the most comprehensive of which is the Genuine Progress Indicator, developed by the Center for Sustainable Economy in the U.S. So far, however, no popular political campaign has come together on the issue.

Such a campaign is long overdue. It is central to a broad coalition of reformist objectives, including environmental sustainability, affordable housing, social enterprise, banking reform and fair, useful trade that favours producer-consumers over corporate intermediaries. The case for the basic income is closely linked to all these objectives.

To answer this need, Human Politics is launching a project to bring together organisations, groups and individuals in the formation of an international campaign to change the way that wealth is measured and valued. The starting point is to gather expressions of interest and support. If you would like to be part of this, head over to the Human Politics website and join in...