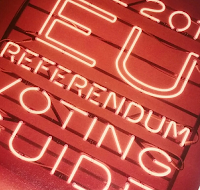 Continuing the Referendum theme, a friend wishes they knew what the E.U. really does for us. This is not a Life of Brian moment but a measured desire to understand the pros and cons in order to make an informed decision.

The leaflet circulated to every household by the Electoral Commission offers little help. The page on the Yes side says "More jobs. Lower prices. NHS protected." while the one for No says "Our last chance to take back control". Yes is appealing to economic self-interest, No to a sense of nationhood. Such different value systems are difficult to compare.

This was reinforced in a research paper by Neil Smith that came my way this week. It makes the fascinating point that the UK is a member of the European Economic Area (EEA, which includes EU members and a few non-EU countries such as Switzerland, Norway and Iceland) independently of its membership of the EU, so leaving the EU does not, legally speaking, mean leaving the single market.

If so, the outcome of the vote will change Britain's economic relationship with Europe very little. The referendum question, as Neil points out, is essentially political. Once we understand it as such it becomes much easier to parse. Two visions are on offer, one nationalist, the other internationalist. What confuses the picture is that each vision separately embraces a wide range of political perspectives.

Internationalism is a central tenet of the socialist movement, for whom solidarity among working people transcends borders. But the capacity to operate internationally is also of key importance to corporate capitalism. This is why the traditional socialist Jeremy Corbyn is lined up with free marketeer David Cameron on the Remain side.

Nationalism also has its different facets. It embraces a spectrum from nasty racism to idealistic self-sufficiency. The leave side unites opponents of globalisation with neo-liberals who think that EU regulation is a drag on free market capitalism.

Given these odd associations of bed-fellows, anyone wanting to make a measured decision is entitled to be confused. The referendum has set up a false dichotomy which does not reflect a far more vital struggle  - one that pitches the values of global corporatism against those of human-scale relationships. Looked at like that the question for 23 June is simple: do we want to wage that struggle on our own, or in partnership with our European neighbours?