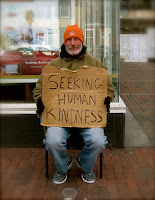 A member of parliament is murdered while doing her job. Flags fly at half mast, parliament is recalled for tributes, campaigning in the referendum is suspended, the prime minister and the leader of the opposition share a platform and the challenger parties decide not to contest the now vacant seat.

These are far from empty gestures. At the height of the most divisive, dishonest and ill-informed political confrontation that most of us can remember, it has taken a tragic act of violence to set free the instincts of our common humanity. It has reminded us that to empathise with and care for one another, to support each other and to share in our deepest feelings, whether of joy or of loss, is profoundly normal. As such, it throws into stark relief how entirely abnormal is the institutional behaviour that our political and economic frameworks impose.

In the House of Commons on Monday, the words of Jo Cox were repeatedly invoked, that we "have far more in common with each other than things that divide us”. Jeremy Corbyn said that her death should mark the start of a “kinder and gentler politics”, a tacit acknowledgement that, for the most part, politicians of all persuasions want good outcomes for ordinary people, but are trapped in a competitive, adversarial system that they believe cannot be changed.

Our institutions of governance are adversarial by design. They demand conflict for the explicit purpose of squeezing out human feeling. In politics they set government against opposition, party against party, each fighting to deprive the other of power and control. In the economy they set the owners of capital against paid workers, lenders against borrowers, home owners against renters, shareholders and directors against their employees, corporate interests against social justice, middlemen against both their suppliers and their customers. In the law, they set plaintiff against defendant, the wealthy against the disadvantaged, the state against the dispossessed.

I am willing to believe that, when David Cameron invoked the "big society" before the 2010 general election, he genuinely sought to favour collaboration, sharing and fairness over greed and acquisitiveness. Then, in government, he found himself driving a system so completely in hock to the owners of capital that prioritising their interests became essential. If the current government, neo-liberal to the core as it may be, could see a way towards universal prosperity, greater equality, a better-funded health service, etc., without spooking the markets, I don't doubt that it would take it. But they can't see a way because the system has blinded them with false certainties that they dare not challenge.

The bizarre consequence is that the government addresses the housing crisis not by increasing low-cost supply, but by offering cheap loans that force up house prices still further. It addresses poverty not by investing in opportunity, but by making the consequences of unemployment more painful. It addresses economic weakness not by seeking to unleash people's creative energy, but by allowing corporations to profit from low-paid, dead-end, insecure jobs, the growth in which it then describes as a success story.

The arch-marketeer George Soros explains why this is: Britain, he writes, "is more dependent than at any time in history on inflows of foreign capital". Brexit will reverse those flows, he predicts, causing a 20% drop in the value of sterling, offering rich pickings for speculators while making most voters considerably poorer.

Even without Brexit, the government is forced to sell or outsource every revenue stream it can come up with, from crazily expensive nuclear power contracts to national infrastructure to the provision of prisons, and many, many others, in order to keep that foreign capital flowing in. And the more revenue it sells, the more it has to find to sell, because the capital flowing in to buy those streams is more than matched, over time, by the revenue flowing out in the streams themselves. The debacle of the Private Finance Initiative (PFI) is proof of that.

The British economy is on a treadmill that is running away from it. Some time soon, its feet will not be able to keep up and it will fall over. That time could come on Friday of this week, or it could come in one, two or three year's time. That is why the outcome of the referendum does not hugely matter in economic terms. Soros is right, of course, but for the increasing army of Britons who feel that the economy has abandoned them, a crisis now may be more attractive that one merely postponed.

In this context, Britain's divisive political establishment looks like a pack of jackals fighting over a rotting corpse. There is nothing good left for anyone. Just as Syriza discovered in Greece, any party in power is faced with the same depressing certainties, the same obligation to conform to the expectations and requirements of the international financial markets.

Those markets have no morals. If we run our economy on their say-so we must reap what we sow. But if we want that kinder, gentler politics of which Corbyn spoke, we must first shape a kinder, gentler, economic system in which human effort, rather than market capital, is the guiding principle.

We are already learning what a people-focused economic system looks like. It treats housing as a social need, not a profitable speculation; it invests in people, allowing them to do productive work, whether paid or unpaid; it measures economic activity not as GDP does, in terms of money transactions, but in terms of the social and environmental benefits that it brings; it treats money as a tool to facilitate social interaction, not as a vehicle for creating debt owed to vast banking corporations.

The transition from an economy focused on the capital markets to one focused on people's aspirations, capacities and needs will take time, and careful management. But before all of that, it calls for political determination to work towards a better system. Irrespective of the outcome on Thursday, the lesson of the reaction to Jo Cox's death is that politicians like the idea of working together to build a better society for us all. Maybe on Friday they could get going on that.