We need to talk about financial services... 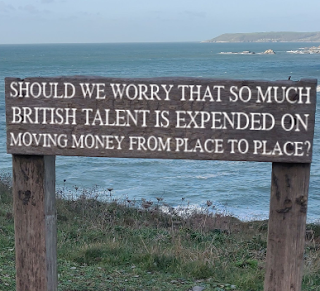 Buying British is an uphill struggle. Is the City's vaulted financial services industry to blame?

Adrian Chiles is making a radio programme about what happens when he tries to live as best he can wearing, eating and using only things made in Britain. Unsurprisingly, it’s not that easy. Food is possible, particularly if you buy fresh, but you'll have to live with a limited choice. The latest figures show that only slightly more than half of the food we consume is produced here.

Meanwhile there has been a modest renaissance in UK-based clothing manufacture, but it’s still a niche market. And when it comes to consumer goods, it’s rare to find a “Made in Britain” sticker except on some hand-made and high-end stuff.

As Adrian points out in his Guardian column, manufacturing accounts for about 20% of the UK, economy. But that’s manufacturing in the broadest sense, including construction, mining and energy, as well as making goods for sale. Actual manufacturing is well under 10%. The other 80% of the economy is made up of services, of which wholesale, retail and transport are among the largest components. It turns out that far more of our economy is taken up with getting stuff to us than with making it in the first place.

Adrian also rightly notes that Britain is strong in the creative industries, tech innovation, engineering and medicine. And, of course, financial services, which he freely admits that he hardly understands. Financial and related services do, indeed, make up the biggest single chunk of the UK’s economic activity.

In not understanding how financial services contribute to the UK’s wealth Adrian is far from alone. It is taken as a given that the our status as a financial power house is making us rich. In practice, however, financial services don’t really add value, or nowhere near as much as the figures might suggest. Most of what they do is move money from pillar to post, taking a cut on the way. That cut is huge, and makes these services seem very profitable. The trouble is that this profit is coming out of other people’s pockets. Those services are not actually creating anything new.

And there’s another problem, too, because the financial services industry soaks up a huge proportion of both the money and the human talent that the UK could be investing in its productive economy. In other words, one of the reasons that we don’t make much anymore is because so many of the engineers, entrepreneurs and other talented people who might drive those productive businesses have been creamed off into high paying but unproductive City jobs, and they’ve taken most of the money with them.

Research shows that only about £1 in every £10 lent by British banks goes to non-financial firms. Most of the rest ends up either in the finance markets or in property. Banks won’t lend to new businesses wanting to do and make innovative, useful things if they can more easily find a home for their money in speculative but well-secured unproductive investments. There's a strong argument, therefore, to suggest that the dominance of the UK’s financial sector is part of what’s dragging the productive economy down.

I’m looking forward to finding out how Adrian gets on with his eat / wear / use British adventure when it broadcasts in a few week's time. But perhaps he could follow it up with another programme asking how useful really are all those financial services that so few of us understand?

Martin Whitlock
Martin Whitlock is a writer, businessman and keen amateur builder. He is the author of Human Politics, Human Value, an incisive analysis of the shortcomings of the current economic and political system, which has been described as "near-perfect in its diagnosis and advocacy".
Martin is co-convening the #humanpolitics project at www.humanpolitics.org.