A new direction for human politics 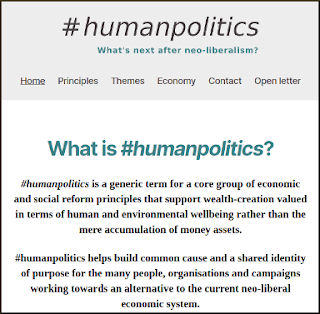 "What if we ditch the capital letters in Human Politics and reimagine it in lowercase, not as an entity but a concept - as a counter-narrative to neoliberalism?"

Humanpolitics.org has been around since 2006. It had a major reboot when my book, Human Politics : Human Value came out in 2014. Now, the combination of the Covid crisis and the Brexit denouement means that change is in the air and I’m keen to see what Human Politics can contribute to that.

One thing is increasingly clear. Yet another organisation campaigning for economic and political reform is not what is needed in an already crowded field. There is also a growing number of organisations working hard to connect existing groups and provide shared resources such as training.

But what if we ditch the capital letters in Human Politics and reimagine it in lowercase, not as an entity but a concept - as a counter-narrative to neoliberalism? After all, neoliberalism is not a membership organisation; it’s merely a term to describe a particular economic and political framing. Human politics in lowercase can be exactly that: a framing for a set of socio-economic principles that place human and environmental wellbeing front and centre of political endeavour.

With this in mind the latest iteration of the human politics website is focused on #humanpolitics as a generic descriptor for a set of economic and political policies and principles that the website sets out. It is not a campaigning platform, but simply a point of reference for anybody wishing to embrace the term.

Read our open letter setting out the reasoning behind #humanpolitics and what we think it can do, either on the website or as a pdf download, and please do share these links as widely as you can through your networks. Help to get people talking and writing about human politics as an expression of the desire we all share to reform the political and economic system now.

The #humanpolitics social media pages will now be promoting the humanpolitics hashtag by relaying news items, posts and other media covering the policies and principles that the term human politics describes. The Instagram page will cease for the moment, since it is not the best platform on which to share content.

On a personal note, this means that my own political and economic output is migrating to a different platform, including my personal social media accounts. I have changed the links on some earlier social media posts so my recent blogs can still be found. To keep in touch, please connect with my Facebook page, or via Twitter.

I will still have plenty to say, and will continue to reference human politics and promote its adoption as a generic term. But beyond that I give it to the world, and invite the world to make use of it. Thanks for your continued support - let’s seize this moment when the old order is falling apart to usher in a new economy that places humanity (people and the planet on which we depend) before money.

Martin Whitlock
Martin Whitlock is a writer, businessman and keen amateur builder. He is the author of Human Politics, Human Value, an incisive analysis of the shortcomings of the current economic and political system, which has been described as "near-perfect in its diagnosis and advocacy".
Martin is co-convening the #humanpolitics project at www.humanpolitics.org.