Bonkers Economics - is it me, or is it the system that is crazy? 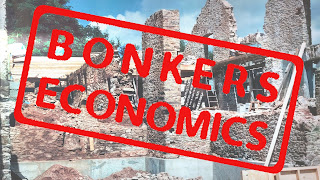 This week sees the launch of my new video series, Bonkers Economics. First up, I'm asking why we're all so addicted to rising house prices. I say addicted because rising house prices really are that harmful, even for homeowners, as the video explains.

The video lasts nine minutes and can be found here. For those who prefer reading or would like a quick synopsis or recap, the key points are as follows:

The bottom line is that most money that goes into housing stays in housing through the generations, and higher prices just result in future generations paying more. At some point this crazy dynamic has got to break, and there are lost of ways that the government could bring down prices without causing a financial crash. There'll be a Bonkers Economics video soon about that, too.