THE GOVERNMENT IS IN A HOLE OVER HOUSING. TIME TO STOP DIGGING. 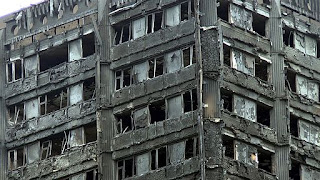 As the fallout from the terrible fire at a tower block in North Kensington continues, it may still be months before we know the precise details of what went wrong. The broader context, however, is already clear. That context is the housing market, which has taken a universal human need and turned it into a financial investment that ever fewer people can afford.

This picture is clearly painted in a new report that shows how older people have stacked up £2.3 trillion in the past two decades through gains in a housing market from which most young people are excluded. It reminds us that buying a home, unlike a conventional purchase, transforms a person's relationship with the money system. From wanting prices to be low, to make a home affordable, they now want them to be as high as possible, both to maximise the value of their asset and and to reduce the proportion of it that they owe to their lender.

That, at least, is the working assumption of which the politics of housing is based. It is a story of winners and losers in which winners have houses (appreciating assets) while losers rent (handing over money that they will never get back). Since everyone wants to be a winner we are encouraged to think of home ownership as an aspirational norm. Meanwhile, a report from Shelter suggests that more that a million private renters could be homeless by 2020 - the ultimate losers in this divisive system.

If home ownership is the "norm", it is easy to see how landlords - including the owners of social housing - may view the accommodation they provide as "temporary", and therefore not needing to meet "permanent" standards. It explains why, according to this report,  one in three private rented properties in England does not meet the minimum standards for a decent home. If renters are merely perched on a stepping stone to home-ownership, why does the condition of their home matter? And if they're stuck with renting for the long term it must be because they're too poor, too disorganised or insufficiently motivated to achieve the market participation that society expects.

In reality, however, the ownership we're talking about here is not of housing, but of land. Building land is hugely valuable; it represents a high proportion of a home's market value. Government, both centrally and locally, controls the supply of that land through the planning system. It also owns a lot of it, and it used to own far, far more. The sale of public land assets, either directly or via the privatisation of public service companies, has been unrelenting since the 1980s.

From council housing, railway land, sorting offices, army housing, court buildings, police stations, hospitals, playing fields and car parks to other large acreages of the public realm, cash-strapped government departments and local authorities have sought to maximise the short-term value of their land assets. Whether it is true that the cladding at Grenfell Tower was added to make it look more attractive to residents of other, higher value, developments, it certainly rings true. For many local authorities, the supply of so-called affordable housing is contingent upon the returns they can make on high-end property built on formerly public land.

Now, however, the long term consequences of this short term market opportunism are becoming painfully clear. Land values are such that more and more families have to be housed at least partly at public expense. Through housing benefit, subsidies to developers and homebuyers and grants to housing associations for land purchases, government is paying handsomely for the land value frenzy of the past thirty years. Not to mention the costs that arise in the wider economy when housing takes such a large part of people's incomes.

When you're in a hole, stop digging. If asset-stripping the public realm for short-term gain is making matters worse, it's time to try different approach. What if, instead of milking it for profit, the government made housing land available at zero cost? Houses would be sold for the value of their bricks and mortar only, on condition that they are only ever re-sold on that basis. The savings in housing benefit and other subsidies from this new stream of ultra-affordable housing would soon outweigh any short term bonanza.

Over time, this secondary market in zero land cost housing would bring down prices on the open market too. Provided this effect was slow, and managed, would that really be such a bad thing?